Misha is a bear/hyena hybrid creature that was born in September 1999 in Montana, United States. He was born in Saint Mary Lake, the second-largest lake in Glacier National Park where he roamed the area with his mother until she was killed three weeks after he was born. Eventually, he became the pet of Patrick Dunbar after he was saved by him.

Misha was born in Montana, United States in September 1999 where he lived with his mother in Glacier National Park until she was killed by some creature when he was three weeks old. Alone and defenseless, he didn't have anyone to protect or take care of him when he fled from the creature that killed his mother, but it didn't take long for his tracks to be followed.

That same creature that killed his mother tried to attack Misha, most likely wanting him dead as well, but Misha was saved at the last second by the Earth Elemental Patrick Dunbar, who fled to America during the heights of the First Wizarding War after he was killed in Battle of Hogwarts, but was soon after resurrected due to the creation of the Spirit World.

After being saved, Misha began to see Patrick as his parent and the cub began to follow him around throughout his journey to find one of the Dark Lord his Horcruxes. Patrick looked after his well-being and took him under his wing as his own pet since he felt a deep connection to the bear, which seemed to feel said connection to him as well. That day his owner named him Misha, a name that he began responding to his entire life.

After the war, Misha stayed at Dunbar Manor where his owner moved into alongside his brother and their partners. In 2006, Patrick moved out of his family manor and went to live in Raeken Estate with Theo Raeken, whom would later become his husband and father of their children. This became Misha's permanent residence for the rest of his life. The land surrounding his new home was filled with trees and was one big forest in which he did spend a lot of his time in.

Misha is often described as being like a large hyena/ bear-like creature around 4-6 feet tall or the size of a black bear. Some have speculated that he is in fact a misidentified hyena or a surviving chalicothere. It is said to have a brownish red to a dark color coat. He leaves five toed, nearly 9 inch long tracks that are distinctly canine. In some accounts the bear has demonstrated a tendency to rise on its hind legs when observed. It's a nocturnal animal with high shoulders and a sloping back. He had thick dark reddish-brown fur, a thick mane, large teeth and a long pointed head and snout, said to be similar to that of the American Brown Bear.

He is extremely loyal and protective to his owners and would do anything to make sure they do not get harmed. Misha feels it is his responsiblity to protect Patrick and Theo Raeken now that he is not a young, defenseless cub anymore. 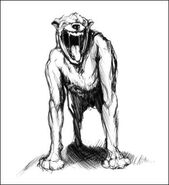 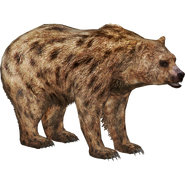